I was recently asked to write a review for British Woodworking 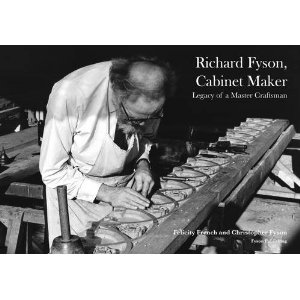 Richard Fyson, Cabinet Maker
The history of British furniture makers in the early 20th century is generally well documented centring on such Arts and Crafts luminaries such as Gimson and Sydney and Edward Barnsley. The link between these inspirational figures and contemporary designer makers was Edward Barnsley (1900 – 1987) who set up his workshop in 1921, which continues to this day producing commissions and providing training for future craftspeople. Barnsley managed to survive the economic cycles and changing fashions, but it wasn’t until the Craft Revival of the late 60s and early 70s that contemporary furniture designer–makers begun to flourish as economic policies encouraged greater prosperity.
Alan Peters, alumnus of Barnsley’s apprenticeship programme, set up his own workshop at the very beginning of the Revival, becoming the role model for many of us who were making our way in the early and mid 1970s. But what was happening in the 50s and 60s following World War II when traditional craft skills and workshops were being swept away in the name of modernity and technology?
When Nick Gibbs asked me consider reviewing this book I was curious but sceptical that it might be vanity publishing. What I discovered was a document that has its place in the history of British furniture makers. It gives a rare insight into the life and work of what would otherwise be regarded as an “anonymous” but dedicated craftsman who, as well as a handful of Arts and Crafts-inspired individuals, kept the candle burning throughout those opaque post-war years; the book shines a fascinating light on this period.
Richard Fyson (1917-2008) was a self–taught, gentleman cabinetmaker, a distinguished naval officer who at the age of 32, accompanied by his wife and three children, turned his back on a comfortable career to follow his passion, working in wood.  The only obvious advantages he brought to his new vocation were his self discipline and people-management skills. His extraordinary capacity for hard work combined with long hours enabled him to run a very busy workshop and market garden business, based at Kencot, Oxfordshire, just a few miles from Kelmscott, William Morris’s home.
Written as a short biography, divided into decades, followed by an extensive thematic catalogue of a lifetime of commissions the book provides a valuable insight into a career spanning over forty years. There are an impressive number of church commissions in Oxfordshire and further afield, which probably can still be seen today. His public commissions also extended to Oxford University projects including a commission from the famous Bodleian Library for forty chairs (at a cost of £18.00 per chair). Oxford University College commissions included Lincoln and Keble. A commission from Nuffield College, for which he competed with Edward Barnsley, seemed to have resulted in collaboration between them. It appears that Fyson’s design was rejected but instead he made a series of tables and benches to Barnsley’s design. He also produced a significant number of domestic pieces for private clients; the overall impression is a high level of craftsmanship combined with a diverse approach to design.
The book gives us glimpses into the crafts people community of the 1950s. This is reinforced by Fyson and Barnsley’s friendship. We also learn of the formation of a furniture makers’ association in 1955 following a conference attended by twenty-five furniture makers; Fyson became its treasurer. The idea of community also extended to his long-term commitment to training the next generation; a total of 27 trainees over a 34-year period. Matthew Burt, one of our leading contemporary designer-makers was amongst them. Matthew’s tribute in the book gives us a measure of his mentor, “He gave me someone to compete with, in the best sense of that word … His standard of craftsmanship … was steadfast, exemplary, aspirational and a perfect role model …”.
The book is an affectionate celebration of a generous, honourable and passionate gentleman-craftsman and a worthy reminder that a spiritually rich and meaningful life can be derived from following one’s heart in service to one’s community. His family has meticulously produced it. Felicity French, his youthful granddaughter, is credited with compiling it; the addition of new, colour photographs has given the work a refreshing updated quality. The book can be enjoyed as an inspirational insight into an exemplary craftsman’s life; it is also another valuable piece of cultural history thanks to the unstinting efforts of the Fyson family.
Posted by Philip Koomen Furniture at 7:33 AM No comments: 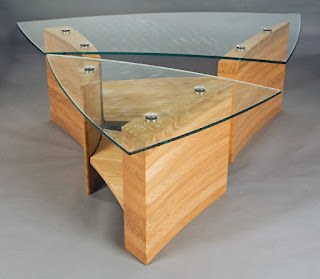 Wood, glass and stainless steel create a sophisticated combination. This design for a coffee table is another design for a client that takes an earlier idea a lot further. It’s given a lot of creative satisfaction. Ebb & Flow is a series of designs that explore the dynamics of simple curvi-linear forms in wood. The split glass top adds another dimension. It’s been an adventure; sometimes the simplest designs are the hardest to get right! 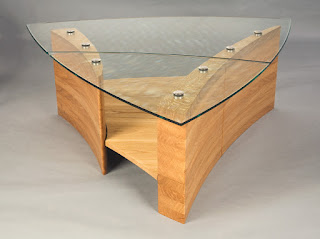 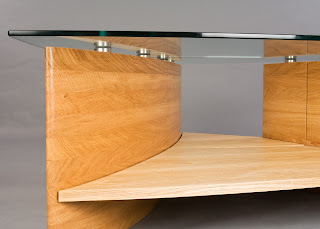 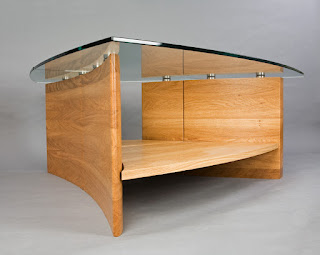