We are at Art in Action

I'm at art in action (19-22 July) with my son Jody who is a furniture maker based in Northumberland. Please come and visit us at our stand in the OneOak tent. See earlier posts about this special project and the Sylva website.

Posted by Philip Koomen Furniture at 5:51 AM No comments:

Father & son getting ready for Art in Action

Jody and I have been getting ready for Art in Action, making furniture from the wood of the 220-year old oak from Blenheim Palace. We will be demonstrating and co-exhibiting with other artists and crafts people as part of the OneOak project organised by the Sylva Foundation.
One of the pieces I made was a large dining circular dining table. This photograph was made by Nick Gibbs of British Woodworking when he featured me in his magazine for the July/August edition this year. 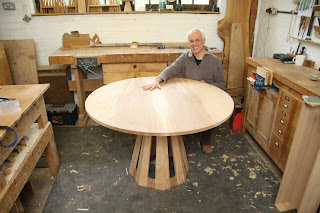 The Month of June

On 18 June I accompanied one of my clients to co- judge the Best in the Show at the National School of Furniture, (Rycotewood Furniture Centre), Oxford. This client annually awards a £1000 prize, called the Hellen Award in memory of his wife, as well as a few smaller monetary prizes given as encouragement. The students' range of work was very impressive so selecting a worthy winner was a bit of a struggle; fortunately we had  Joe Bray, the course leader, to give us some background information, which helped.

I have been helping Design and Technology GCSE pupils and their teacher Sean Murray at Langtree School, Woodcote with a design project to stimulate their understanding of design and sustainability issues. This project was inspired  by a donation from one of my clients, in memory of a loved one, who wanted school children to have an insight into the world of the designer- maker. Certificates of excellence and cash prizes were awarded to four pupils at the school Art and Design exhibition, Thursday 21st June. It was encouraging that the most outstanding pupil was a young woman, Sophie. There were also enough funds to buy some new equipment for the school, including a Festool "Domino" ( it makes tenon joints), sash cramps and various tools. The company Festool generously gave a 50% discount, worth £450, which made the purchase possible; this was thanks to Nick Gibbs, Editor of British Woodworking, who put in a good word.
I will be continuing my involvement with the School next year; I think I've learned more from the experience than the pupils! Teaching this subject, at this level, is very challenging; Sean does an excellent job against the odds.
Posted by Philip Koomen Furniture at 2:02 AM No comments: